This article is a stub. You can help Doom and Destiny Wiki by expanding it.

Battle Postcards are a special customization feature for the Arena in Doom & Destiny: Advanced. These postcards unlock new offline battlefields in which your opponents fight you in offline network battles at the Arena. The battlefields are also refered to as "BattleBacks" (short for "Battle Background") at the Arena's Red Crystal menu.

Not only do postcards modify the appearance of your battlefield, they also give special bonuses to teams during offline fights.

Postcards can be found in many locations during your adventurers but they can also be bought at the Arena's postcard shop (at the north west of the main arena area).

The following postcards can be found as you explore areas during the storyline or during the post-game:

Postcards Sold at the ArenaEdit

You can buy cards from Master Muscle at the battle postcard shop, north west (up and to the right) of the first arena area.

You have two options to buy a postcard at the arena's postcard shop:

You can set or change your current offline battle background ("BattleBack") at the Red Crystals found at the Arena ("Set up Online Battles!" > BattleBack > (choose one) > Select "Set Current").

Arena - Speaking to Master Muscle at the Battle Postcard Shop.

Buying a specific Postcard at the arena shop. 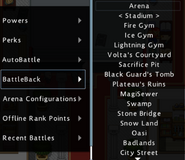 To see which battle postcards you currently own and hence which battlefields are unlocked, you can find them in the regular menu under Menu > Inventory > Artifact.

There are 38 different battle postcards in the game:

Retrieved from "https://doomanddestiny.fandom.com/wiki/Battle_Postcards_(Doom_%26_Destiny:_Advanced)?oldid=16221"
Community content is available under CC-BY-SA unless otherwise noted.